A Second Helping of... 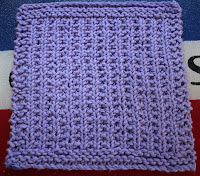 Last night while knitting up a new 'copy' of Mom's Broken Rib Dishcloth I realized that my knitting has changed since I wrote that pattern. This cloth felt loose to me. It was originally made with the smaller size Mom likes for washing her dishes. After I finished it I knit up a second one with smaller needles and a few more stitches. I like this newer version better. Can you see the difference in size? 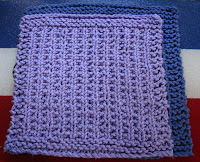 Just a few extra stitches, a couple of more pattern repeats, and the drape feels much better. See the back?

I like the texture here, too. It's great for scrubbing dishes. Yep, I use my dishcloths and so does Mom. 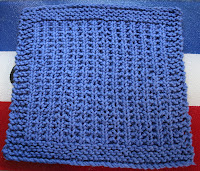 My daughter got her Second Sparkly Hat (SSS Hat) this week and was very pleased with it's fit. You can bet I'll be making her a few more very soon! In fact, I have both brown and camel colored Encore skeins waiting to hit the needles with her name written all over them. It's fun to think that I've made enough hats over the past several years and can now custom fit hats and beanies for the kids in just their preferred sizes. She likes the way the edges fit snugger (smaller needles for the cuff) than the main body of the hat and the way it comes down just below her ears. The older ones she had were 'just that much' too short. In my opinion it's easier to figure out how to make a hat fit when you have the daughter in town to try on hats and measure her head. I'm just sayin'.... 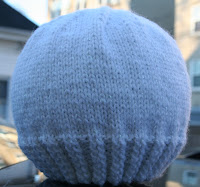 Notes on the SSS Hat: I made the hat identical to the first one with the exception of making the cuff flat- not turned up, using the same wool-ease yarn. The pattern should look very familiar. 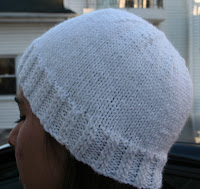 In other news around the family, the KBB Blanket was made for my cousin's baby due in August. I was so sure that they would be having a boy. Guess what? She's not a boy! She's going to be a girl...and that's making her Grandpa very happy! He's always wanted a daughter. Now, after two sons, and a Grandson, he's getting a girl! I'm guessing this will be one very spoiled Granddaughter! Since none of my daughters (or my son) knit, (they were taught, but have learned to say, "Mom, I need this and this by this date, can you make it up for me?") I have offered to let them pick out something for me to knit for this little one yet to join the family. Middle daughter picked another Feather and Fan Rainbow Baby Blanket. I saw that coming! Waiting for the rest of the pickings to be, well, picked. That makes it a second helping of knitting a blanket for my cousin, and a third helping of F and F Rainbow blankets.

Dad is still in the hospital. Post surgery he was doing well enough that they gave him a round of chemo. A few hours later he started with a few issues that's kept him admitted rather than going home last Thursday. He's now looking at Monday for a possible release date.

The kids and I decided to send him this, even though it will arrive after the tournament has finished. The kids thought it was a perfect choice for the Grandpa of two UCLA graduates. Not to mention it was time to add to Grandpa's hat collection. Maybe we can convince him that his hat collection is a better hobby than surgeries and hospital stays? I keep suggesting knitting as a hobby to substitute, but he just laughs it off and declines the lessons. OY! Parents!
Posted by Cathy at 8:55 PM

I really like your mom's dishcloth pattern. Thanks for sharing. I'm thinking of making a baby blanket from the pattern.