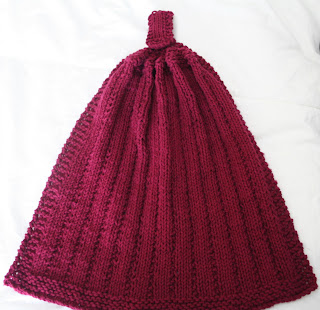 The KBB Hanging Hand towel is now finished...save for a button. I've gone and tried to take pictures at each step to help you visualize the top of the towel. To remind you, I have also included the pictures previously posted in case you want the whole process in one place. Remember, I started with a bag of mill ends with the skein being ~8oz, which is not the 'normal' size unless you can get those big skeins that Bernat puts out from time to time.

When I made my blue set months back, both the hanging towel and the dishcloth were made with one single skein of Lion Cotton, which comes in 5 oz skeins.

So the choice is up to you. One benefit of a 5 oz skein or a bag of mill ends with such a large skein, is being able to make the whole towel with a single strand. No piecing together two skeins and having to weave in ends. The other benefit of the mill ends is the cost savings. Now, who doesn't like saving money on yarn?

K, k=Knit
P, p=Purl
Sts, sts=stitches
Tbl=Through back loop
Kfb, kfb=knit through the front and the back of the same stitch, increase stitch
Sl = Slip
PSSO=Pass Slipped Stitch Over
* *=repeat the directions between the *'s
Tog, tog=together

Cast on 59 stitches. K 6 rows for the lower border, and begin the pattern. Remember that I like to slip the first stitch of each of my rows.

Repeat rows 1 and 2 for a total of 36 pattern repeats, or until 13" from the beginning of the cast on row. 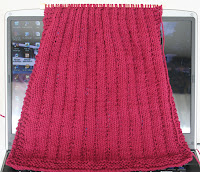 Begin decreasing for the towel top

Start the Tab Section of the towel top

Cut thread ~18" long, and whip stitch around the button hole for added strength, weave in ends, and sew button into center stitches of tab decrease row #12.

All that's left, is to knit up a dishcloth or two to go along with the towel! 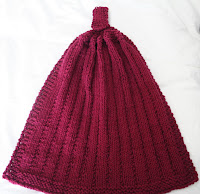 Thanks for the pattern for the towel. My mom always made the dishcloths and then made towels out of terry cloths cut in half and crocheted the top part. The towel always wore out before the dishcloth or potholders or the top of the towel. She isn't making them anymore as she has alzehimers now. I never thought to knit a towel! Thanks again for all your patterns. Hugs, Louise Z. in Spokane Valley, Wa. [born and raised in Mich!]

The towel pattern is just beautiful! I have to have one in burgundy now. :)
Thank you for sharing your talent with us.

Thanks for the pattern. I'll make some for our kitchen with 3 little ones we need them! Great blog!