"At the Same Time"

How do you react when you're zipping along a pattern and those words jump out at you? Do they make your hands begin to shake? With a little bit of preparation, you should be fine.

Years ago, when I made my first cardigan I had the idea that if I kept track of the number of rows I made the two front panels, they'd match up. That was a true statement. Too bad I didn't match them up to the back section! That sweater is still being worn today. Not by me, but my daughter 'borrowed' it a long time ago. She took it to work in her air conditioned office and the last time I saw it, it made me shutter to see the difference between the fronts and back. I've learned a few things since that sweater.

There are many sock knitters that like to knit both of the pair at the same time. It's the same idea making sure that both socks are knit with the same number of rounds with the same tension to match up to each other. There is a reason I've never publicly shown my first pair of socks. Why I didn't think of it then, is beyond me. After all that first sweater was knit back in junior high school for me. I understood that concept then, but must have had a brain lapse.

Trying to avoid those mistakes, I had cast on for the vest from the beginning all at once. Now, I ended up knitting the back to the armholes before starting the front panels after the ribbing. Had I realized that the front panels were knit with the very same cable pattern as the back, I would have been just fine knitting all three sections at once. 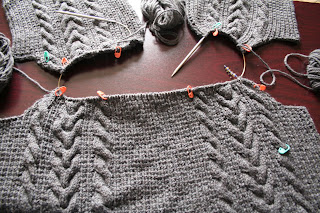 Starting at the armholes, I put all three sections on the same needle. (Thank goodness for circular needles) Stitch markers are a must! Color coding them is a quick visual of where you are in the pattern. I use them for the cable patterns, the beginning of the rows at the start of the cable patterns, and to mark the front sections of the vest.

This is keeping the decreases all in the same section AT THE SAME TIME and the depth of the armholes will be identical to each other. So long as the pattern fits it will be symmetrical. 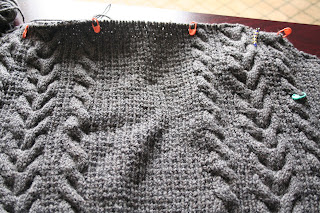 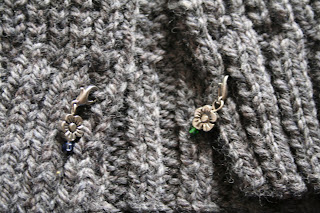 I really like those 'lobster claws' from the jewelry departments in the craft section of the store. They clip wherever you want them to! 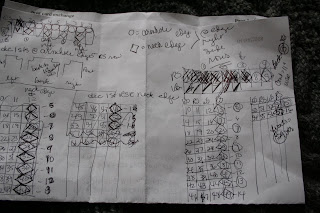 The 2ND best knitting tool that I use is old fashioned paper and pen. I grid out charts of what has to happen and when. It helps me to visualize which row I need to do which direction and AT THE SAME TIME when I need to do something else. For this pattern, I'm continuing the cable pattern, decreasing for the armholes AND decreasing for the neck edges. If I had not written it down, I never would have been able to keep it straight. As you can see by the paper, even the first time I'd charted it out, I still didn't have it all straight. Knitting in public yesterday an older lady noticed me charting this all out and commented on it. She's also a long time knitter and said she didn't think many others did the same thing. I told her, it's the only way I can do this much at once.

How about you? How do you do more than one knitting direction AT THE SAME TIME? 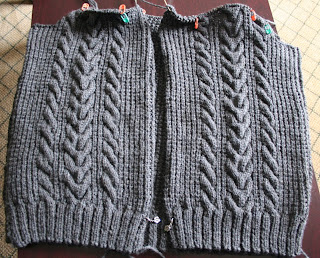 I talked to Dad this weekend on the phone. He's past the 2 month mark of being in the hospital, nearing the 3 month mark. After talking to him for awhile, he said, "I really miss your back rubs." Dad-I miss you, too! I know this won't be the same as a back rub, but I really hope this does the trick of keeping him warm and SOON! He's lost so much weight that I am hoping the 100% wool content will help his warmth factor. I am enjoying this knit. I just can't wait for him to wear it AT THE SAME TIME as being OUTSIDE of hospitals!
Posted by Cathy at 11:54 AM 1 comment: