What do you get the 5 year old who has been the "best baking buddy" of this season? Why you get him the 'Ya, Babe' cookbook for kids with his own little Baking Tool set. Then when he sees the Tribbles sitting on the side and asks for one for his very own, you let him pick out his own colors. 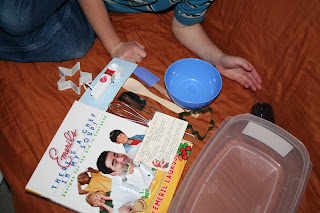 Then, since he's been helping with everything else, naturally he wants to help knit it faster, too! After all he's got a bedtime to adhere to. Right? So he sits up on your lap, puts his hands over the top of yours while together you say, "In, Around, Down, and Off!" Until you get about 10 rows into the Tribble. At that point he opens the book and says what do we have here? You have to repeat what I say the picture is. Until he looks up and says, why are you stopping making my circle thing to do this (rubbing eyes)? You have to stop everything else so you can do that faster! Oh and I want a square one, too! 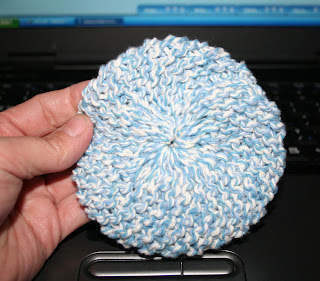 Sheesshhhhhhhh kid! But then when it's finished and delivered, he made up for it when the Tribble was delivered and he told his sister... "It's so soft!"

Ahhhhhhhhh...the child knows which side his butter is breaded on! 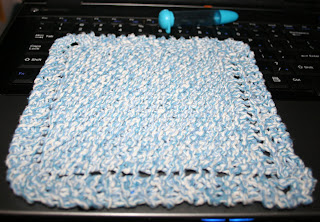 I'm off to finish the Boston set and figure out which ONE recipe to post from my Grandmothers' collection of recipes! oy! ONLY ONE? Sheeesssshhhh Kay and Ann!
Posted by Cathy at 12:49 PM No comments: