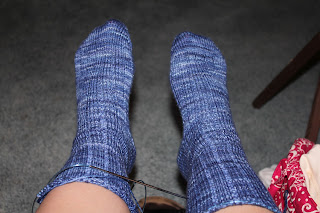 Ok, better news this morning for the 'what did I do with that bag' mentality. I didn't find the sweater before the opening ceremonies began. Don't you love to see all the pomp and circumstance with the beginning of the games? I do! The music, the story telling...the parade of nations...the lightening of the torch....and SIR PAUL! Bring it on baby! So I plunked my rear end in front of the tv and enjoyed watching the festivities with Mom while I soothed my frazzled brain cells and went to town on the class socks. At the end of Sir Paul's emotional ...HEY JUDE! (flashbacks to my summers at the lake down at the store while the 'teenagers' plugged money into the juke box, singing at the top of their lungs.... ha! Fabulous run on there, 'eh?) this is where the socks ended. I am now a mear 13 rows away from bind off of these socks. And that surprised me a lot!  They just flew!!!!! 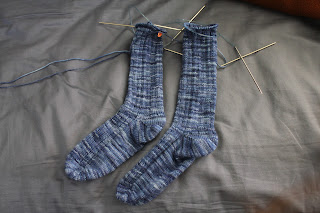 Here's a shot of them side by side today. From ankle to cuff in one simple sit down watching the athletes parade into London. Not too shabby.

But then the 'what in the world did I do' thoughts took over. It was late, the place was quiet, and I KNEW I had brought the bag to Michigan. Where in tarnation was it???????????????  Going nuts time set in and fast. As quietly as I could...I started going through each of my project bags that I have set up and ready to go. I was NOT going to be defeated! 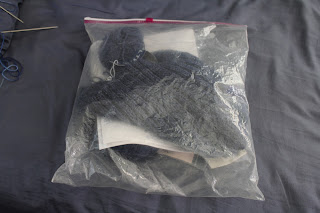 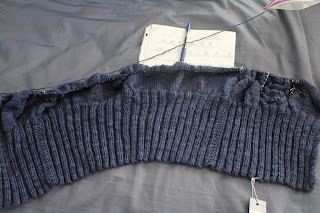 So, not to be denied my knitting time on the start day, I pulled the sweater out of the bag and started reviewing the directions. I think this may have been the first or one of the first sweaters that I started knitting all three pieces together as a single unit. Just garter stitch the edge stitches to make a mattress stitch seam fast and easy when you're finished and you're off and running. What I hadn't done three years ago was to write out the directions in the segments as I need to knit them yet. Right front, back, left front. With the directions written I was finally off and running! It gave me a good chance to familiarize myself with the pattern once again. However at that point I couldn't just lay it aside and say sweet dreams, nope... 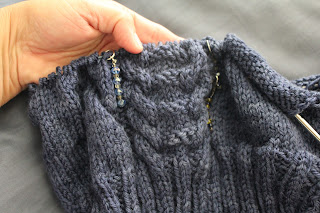 I just HAD to knit up a row to be certain that I'd figured out step by step where I was. It was after 3 am by now and who knows what brain cells are telling me to sleep or to knit by then? And then row three led to row four...hey, this is pretty good, let's try row five, awwwww come on now....onto row six! But...you started with row three, therefore, to be certain you wrote out all directions correctly you HAVE to knit up rows one and two as well. RIGHT? And onto, oh man, these size eights (5.0mm) are sooooo much faster to knit with after all those size one's (2.25mm) and the socks of lately. They nearly feel like telephone poles! What am I going to do once I start Mom's afghan on size 15's? Stop! It's well after midnight. Stop thinking of other projects. That's how you put this one down three years ago and didn't finish it. Focus...focus....you're now getting sleepy......sorta....zz.zzz.zzzzzz 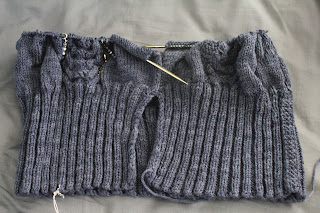 Time to get some sleep. 4:29am.  I was ready. Now that the morning duties are finished, and as soon as I get Mom up to the bathroom again....this baby is going to fly around these needles! After all, I'm down to 16 days left, give or take, and it generally takes me a month of solid knitting to finish an adult sweater.

Hands, don't fail me now! Because.....look what came in this morning's mail! 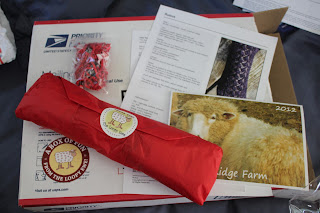 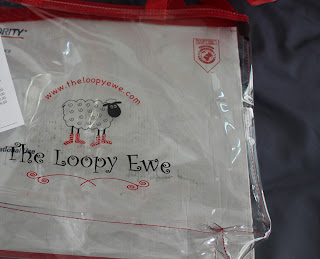 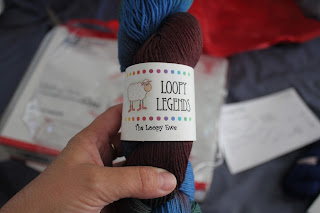 I'm officially a Loopy Groupie! Love a company that understands customer service! And that applies to the LYS here in town, too. More on the newest from them soon. Gotta get to my needles don'tchaknow!