What's this? What is this wet stuff? It's all over the grass...the hedges... 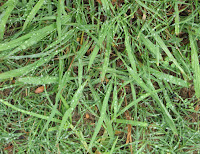 The sidewalk and the driveway....anybody recognize this stuff?

It's appeared all over my car?

It's puddled in the flowerbeds...the cracks in the driveway? 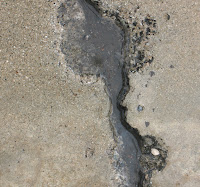 Why, it's actual, measurable RAIN! Yes, here in Southern California, it RAINED overnight! To a measurement of 0.08 inches! Wow-weeeeeee!!! The 2nd measurable rain since April! Think we'll have cracked the drought from the past 8 1/2 years with this? Probably not.
But I thought I'd document it here just in case we have all forgotten what this liquid substance looks like!
In other news, in the continuing saga of the gazillion and one baby blankets that should have been finished last August, another one is off the list. At the current count (please stop drinking the water- I'm soooooooooo freakin' far behind!) there is one baby already here waiting on a blanket, and 6 more on the way. I'm beginning to understand the appeal of knitting machines. ha. 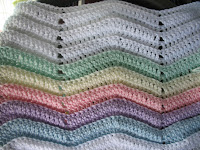 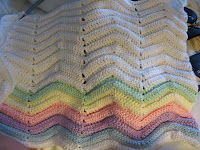 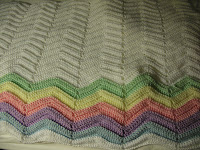 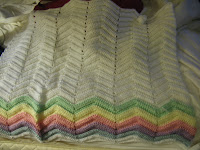 Once again, I bring to you another Crayon Ripple Throw. It's a pattern available through Lion Brand yarns. It's a full sized pattern that I've adapted for 'baby size.' I used an "H" hook, and Caron's Simply Soft yarn. This is the white that has become soooooooooo elusive to find in an actual WHITE shade, rather than a 'grey' tinge. Ulg. That stuff looks like it's been dragged through a mountain of dust bunnies. I wish Caron would get their act together. Some time back I contacted them and they responded saying that they WHITE would hit the stores in August. So far, all I've been able to find is the grey tinged yuck stuff. I'm wondering if that's because that's what they have on hand and wont' order more? What do you think? 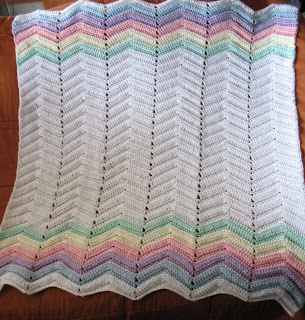 Next up, is another Feather and Fan Rainbow Baby Blanket in the same colors.
The best news of the week? Dad went home on Sunday, and is still at home! He's on a liquid diet and they're monitoring his food very carefully. There's some talk about adding soft foods in the future, but at a very slow pace and not for a little while.
In the last bit of news, I'm frustrated with something that I found by chance reading another person's blog. There was a posting of someone who'd purchased a pattern and knitted a towel for the kitchen. Here's where I got upset. Upon looking at the picture, and then following the details from where she bought the pattern, it's my pattern for my Hanging Kitchen Towel pattern that I worked over several months to get the decreasing and towel topper section the way I wanted it back in 2005. I started from scratch and worked out the details, and have offered the pattern for free here on my blog for people's PERSONAL, NOT-FOR-SALE, PRIVATE USE! Meaning, with the posting and the copyright of any of my patterns, they are MINE! They are NOT FOR SALE OR PROFIT!
Now, the blog writer isn't to blame for this. She, in good faith not only purchased and knitted up a pattern, but also gave credit for it's source. Rightly so. However, the 'designer' of the pattern that the blog writer has posted, in my opinion, has 'borrowed' my pattern and is now making a profit off of it. And it's my opinion, that this person also has several other patterns 'borrowed' from other sources than myself, changed a border here and there...and is making a profit off of other people's intellectual knowledge and time, and their free sharing of the patterns they've written. Now I ask you. Is that fair?

At this point, I'm trying to concentrate on the goodness of my Dad being home rather than in the hospital so very often over the past few months. However, if these patterns aren't taken down very soon, I'm going to have to inquire to other matters. I have shared my designs for your personal use. Not for this other person's financial gains.
Not.HAPPY!AT.ALL.
NOPE.NOT.AT.ALL.