Cup-ee-cakes and a red blanket

Sooooooo, what do you do when your daughter turns 26 and decides to have a slumber party with some of her high school and college friends?

Why you make pink and purple Rice Krispy treats and Fun-fettie 'cup-ee-cakes' (ode to Troop Beverly Hills back in the day of multiple slumber parties at my house) of course! (add a few drops of food coloring to the marshmallows before you melt them)

Then you come home and knit after you drop them off, knowing you don't have to clean up the mess!

The red blanket is coming along nicely now that I've restarted it. The original pattern was written for a (US) 9 needle (6.0mm) and with the Cotton-ease, the fabric it created was just too loose. It looked like stitches were pulled in some weird fashion. I didn't like it. Using a size (US) 8 (5.0mm) needle makes it much nicer and I'm a lot happier with these results.

I've used Cotton-ease for Chemo caps in the past and liked the results. They knit up into soft caps. I'm really surprised with how light weight this blanket feels in my lap as I'm working on it. It's going to make a great summer-weight blanket. I'm still sad to see that first they discontinued this yarn, then brought it back in different colors. Too bad they couldn't have kept the traditional primary colors in the line. I'm not a fan of the new line of colors. To me they remind me of the 80's country colors everyone's kitchens had to be. However, I can't wait to see how this red blanket looks after it goes for a 10 minute tumble in the dryer. For now, the pattern is popping out very nicely in this yarn and shows the lines quite well. For the price, I wish I'd have known how much I liked this yarn in baby blankets before they changed it all up.

Back in 2004, my niece was turning 10 years old. To mark the occasion I wanted to knit her a poncho that was the 'hot new thing' to wear to school. I picked a pattern from Easy Knitting magazine that had been in a light pink color. My niece, however, is NOT a pink girl. She likes red and purlpe. I went for red this time.

As the poncho progressed, it just didn't look quite right in a single color and boy was it bright! There was a lot of red there! Starting over adding black for the ridges in the pattern toned it down to a point where dark sunglasses were no longer needed. Even though it was being made with acrylic (Red Heart Kids) so my brother could deal with the laundry easier, Southern California was in the midst of a heat wave! It was 104* while the double stranded poncho was on my lap! 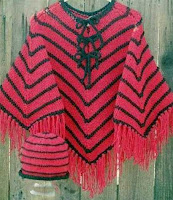 When it was all finished, it seemed to be begging for a hat to complete the outfit. After all, a young lady walking to school needed the whole outfit-right? I've since made this hat up in both the red and black combination and with a white background and each ridge in another color of the rainbow. Feel free to combine your favorite school/team colors, or colors to match a special outfit.
Regan’s Hat
© Cathy Waldie, August, 2004 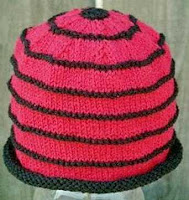 *sample made with Red Heart Kids

Cut yarn, leaving a tail 12-18” long. Weave through the remaining stitches on needle, pull tight and secure. Weave in ends.