How do you make your niece happy?

And freak out your brother at the same time? 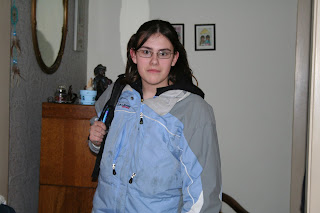 You bring her over to Grandma's. Stop her in the hallway and explain to her that the hospital was having a raffle yesterday morning. Uncle Peter didn't think he was going to be around when they pulled the winning ticket, so he put her name on it. Well. That ended up being the winning ticket! And OH! by the way...she won a 'little bit of chocolate.' Would she like to see it? 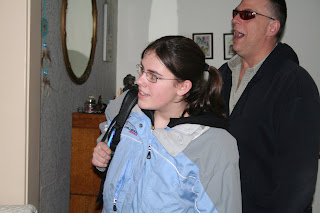 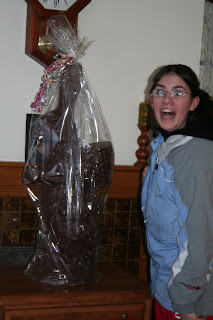 "That's NOT a LITTLE BIT of CHOCOLATE!" 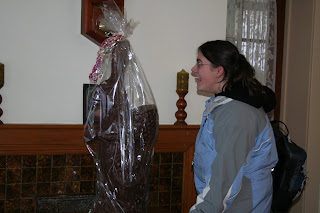 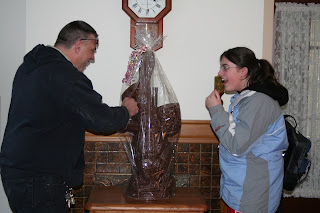 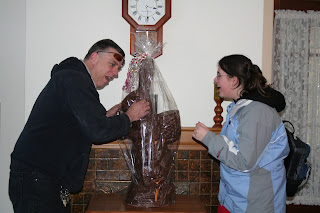 Dad checks to see if it's hollow..(parts are, parts are solid). 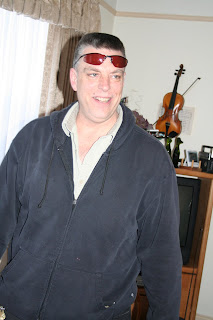 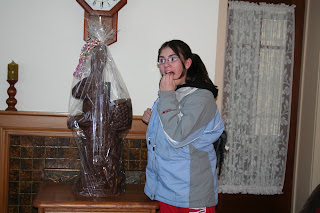 I can't believe it! 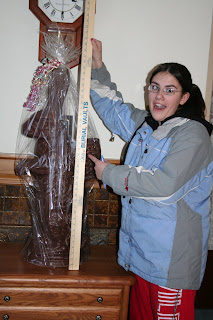 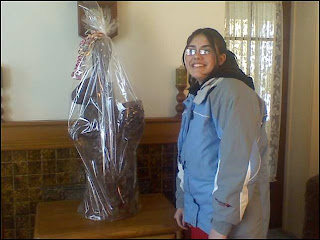 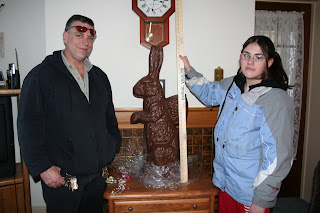 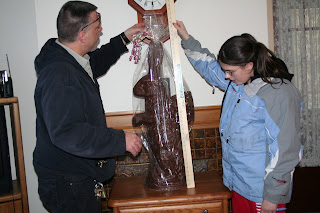 Yep folks, that's a full 36" tall and 20 pounds of St. Laurent Brothers of Bay City Chocolate Bunny! http://www.stlaurentbrothers.com/ Where ALL the good stuff in town comes from! 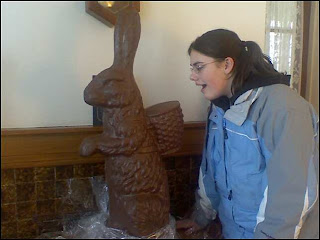 I want a bite! 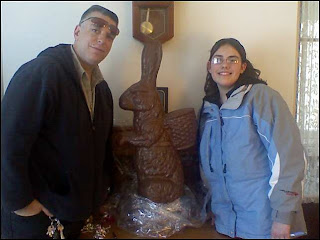 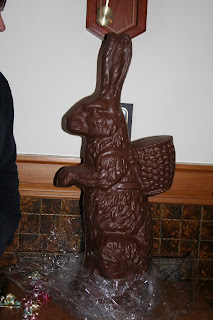 I sure hope she's got a lot of toothpaste and a big toothbrush!

Pre-surprise story and pictures: Mom had her x-ray this am. After checking in on Dad (he's running another fever, probably in infection in his pik line that should be changed later today), we got home to the message about the raffle ticket. After spending the afternoon with Dad I went downstairs to the gift shop to pick up the 'goods'. The lady there said she didn't want to chance carrying it out from the back so could I come to get it. Sure I said, I'd be happy to.

Until I got to the back door and letting out a, "HOLY FREAKIN' COW! That's BIG!" She just stood there laughing. I had gone right past the fundraising table the previous day thinking I was going to behave. I did have a glance at the bunny on the table, but thought no way was I going to be tempted by that much, went up to see Dad and didn't give it another thought at that point.

When I went over to pick it up, another exclamation could have been heard, I'm certain. That sucker was heavy! They lent me the use of their cart, but she was worried that I didn't have anyone there to help with the balance. I assured her with my knitting bag behind my new chocolate friend, we'd be just fine. Yarn cushions, ya know? 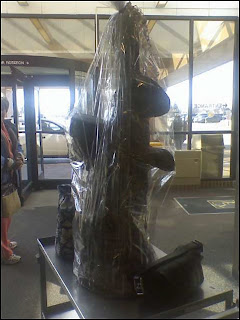 Out in the lobby, I had to take a quick cell phone shot to send to the kids and Uncle. They were NOT going to believe this one! We (my new friend and I) gathered a lot of attention and comments. "Wow-How much does that cost to buy?" answer, "$1.00"...look of bewilderment on the gentleman's face until I explained that my niece won it. Her uncle only bought a single ticket for a dollar. "WOW! That's going to last through several holidays!" I politely didn't tell him of the family's chocolate addiction errrrrrrrrrrr fondness.

Going across and down the street to the parking lot. I was cradling this delicious smelling friend and pushing the cart with my knees. When I got to the driveway the edge was not flush with the street. There was a 'gentleman' there watching this process. All he could say was 'WOW, that's BIG!" but didn't help. I picked up Mr. Bunny and pushed the cart hard with my knees. And over to the car we went.

I'm guessing this is why it was cold outside. Can you imagine transporting Mr. Bunny in the summer, Michigan sun? I did have presence of mind to reach over and turn OFF the seat warmers in the car before loading him up. WOOPS! He's too tall for the front seat!!!!!! I wanted to seat belt him in for the ride home. (can you imagine how much grief I'd get from both of my brothers if Mr. Bunny got home with a hole in him?) So, to the back seat he went, laying down. I prayed all the way home that he not roll forward and smash!

While driving I called Mom to have her prop the doors opened so I wouldn't have to fumble with keys and doors, etc... She had them opened and we were laughing as I reach in for my new friend. I told her I'd carry him like he was my own baby. Nope, I said trying to navigate through the first door! This is MUCH bigger than any of my babies were when I used to carry them! Holy cow! I nearly couldn't get through the 2nd door-I had to twist and turn and shimmy through to make it through there.

By now, we were laughing all over the place. I called my brother and told him, "Mom wants to talk to you when you drop your daughter off. So, please come in for just a minute. OK? Bye!"

Thus the plot had been hatched. Only we didn't know he needed to talk to the teacher for a few moments before driving over. Mom was like a kid in the candy shop waiting. She wanted the drapes opened, then closed. She wanted the bunny on the floor (I vetoed that idea), she wanted the perfect picture (which is really funny since they all get annoyed with my picture taking efforts) the table with the lamp shade...well the table is good, but we can't have the shade in it. Would you like me to hack saw it off? no, but we could take it apart! Uh, No, Mom, we'll figure something out. Oh I wish they'd hurry up and get here! oy! Try this angle, no that angle, just how tall is that thing? Oh, we have to let her measure it, she'll never believe it! 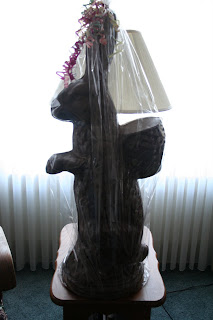 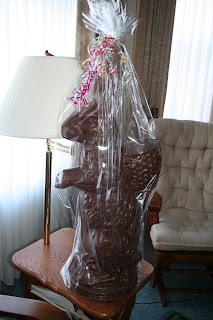 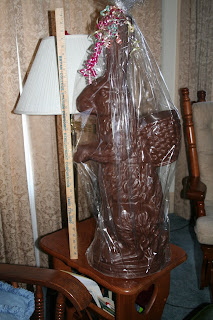 This was as much excitement as taking her to the x-ray department before her morning up of coffee, and then watching her try NOT to climb through the window when the receptionist was drinking a cup! (It's really funny to watch your Mom get that way! So much for the calm, reserved women you've known for the past 'two box' years!) 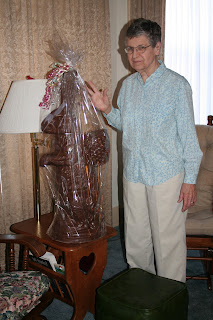 Finally, my brother drove up...and well, you know the story now! What a blast! Thanks little brother for providing us with the entertainment. Sure wish you could have been here to see it all in person!

In actual knitting news, I'm just not getting the knitting done that I thought I would! The baby blanket is moving along if I count the pattern repeats, but it doesn't feel like it. Maybe it's because I keep putting it down? Would that have something to do with it? Hmmmmmm.. 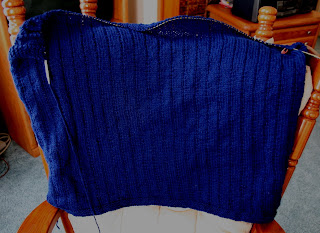 Tuesday night I had the pleasure of meeting up with my friend Janet's Mom. Mrs. "B" to all of us "kids" has begun a knitting group at her church called 'Hearts and Hands of Westminster.' If any of you are in the Bay City area, please support this group of wonderful knitters (and crocheters). [They knit for the soldiers, homeless and the babies at the hospital.] When I got there, after visiting with Dad, they only had about 15 minutes left for the evening. (Do you know how hard it is to concentrate on introductions when you're trying to see all of their beautiful patterns they were already working on?) They were collecting hats to bring over the the shelter. And it was COLD that night. After visiting for 'a wee bit' of time, I found myself at Walmart picking up some yarn to make a hat to go with their huge bag they'd gathered up. 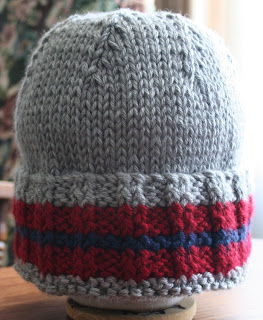 This didn't turn out as good as I wanted, but here are the details. I used the stockinette stitch pattern from KNIT HATS! in the bulky directions. I double stranded the Simply Soft, and made the rib in my 2x2 twisted rib. (go to the directions with my Cathy's Beanies pattern to see how I do that.) then I flipped the ribbing inside out, did a wrap stitch and started the stockinette section. That way I thought the ribbing would fold up and hid the 'back side' of the stripes. Which it did. But it's so thick that it doesn't lay as flat as I would like it to. But, it is warm. Maybe next time I'll hold off the stripes until the top part, rather than the ribbing area.
Thursday afternoon, I met up again with Mrs. "B" and we knitted and she learned about the BSJ sweater pattern while I taught her the I-chord and she's hooked! "HI! MRS. "B" I had a blast!" Thanks for the afternoon of fiber therapy! I really needed it! It certainly fixes a lot of things to sit and knit with a friend, I tell you! I'd really like to say it's cheaper than 'professional' therapy, but that would not take into account how much we love our 'stashes'...needles and patterns and yarn!

Now that I think Blogger will let me post the story here, and not just the title, like it did last night when it erased it all, I'll finish this for now. Time to head up to the hospital and see how Dad's doing for today. I'm scheduled to head on out Sunday afternoon. Last night Mom said she was 'kicking' me outta here! (Stubborn ole' Swede!) But, the next time I'm back, if it's a Tuesday night, you will find me clicking away over in the chapel area with some WONDERFUL new friends I can't wait to meet! I've already sent them copies of my patterns to use.
OH, one last note...my new 'friend' went home with my niece without me getting to help to 'finish' him off. I'm going to have to buy some now. My car smells really good, and it is giving me a chocolate craving like no other! Even after I 'volunteered' my services! ha ha ha....
Posted by Cathy at 9:17 PM 1 comment: