It's been a very busy couple of days, and the busyness isn't about to slow down any day soon. I believe I've mentioned that two of my daughters work in offices with a lot of pregnant co-workers. I guess I misspoke. I had no idea that the phone call I received Friday morning, would really show me what a Lot meant...my oldest daughter has nine..yes, NINE! co-workers who are pregnant! And by the end of July, she'd like to have 4 Rainbow Crayon Ripple throws finished, 2 Heart blankets, 1 white sweater set, and 3 pink Sweater sets. Luckily for her, I was on my way out the door for some yarn shopping when she called. More about that later.
Now, add that to the middle daughter's remaining 2 Rainbow Feather & Fan Blankets, and my son's friend who is having a girl...and he travels back August 1st to school. Think I can get it finished? I had to take the Wings BSJ off the needles for the sweater sets (that baby isn't' due until August 14th), and there's also another family member, who's about to have baby girl #4, but not until November. I think I have a bit of breathing room in there somewhere.

Now, on top of the news on Friday, baby girl flew in to pick up her car and head on out back to school within 24 hours. Hi Mom! We're going to the beach Mom! Now, let's get some ice cream Mom! and GOTTA go Mom!...Whoosh! I believe she flew through here that fast!
Now, next to yarn, I love bins. I really like organizing. I started at Home Depot this week thinking I'd found some good deals...3 bins, $5.99 each, semi clear, flip tops...easy to remember what's inside. That was all good, until I looked inside one, and realized that it was busted up. See it right there on the handle area? Nope, not going to work. Don't you hate that? Not sure who I was frustrated with more..the store for having broken stuff on the shelves, or myself for not paying attention.

With all the blankets requested by the oldest one, we headed out the door on Sunday to start the trekking process of finding some Simply Soft white. This is proving to be quite the challenge. Have you noticed how 'grey' and dingy it's been lately? Rumor has it they're trying to correct it, but I'm not sure it's going to happen in time for the end of July deadline. We easily found the rainbow colors, but only 3 skeins of the 'white'. I'm really missing last year's 12 oz whites that I was able to procure for the middle daughter's requested knitted Rainbow blankets. Had I only known.

These are the bins we found at Linens and Things-2 for $10! Now, we're talking...they're larger than the flip top bins, clearer, making them easier to see into, and bonus round....blue! Now, we're a happy camper!

Friday am I was able to find some great 'wiggles' deals. The store had them all on sale $1.99 with an additional 40% off sale! On Saturday, I found the same colors in another store for $4.99. Can we say...nice deal? Love me a good sale price? I'm hoping those will make some really cute blankets post pregnant co-workers. HEY-would you all mind NOT drinking anymore of that water? Time limits people! I do have a 'few' other things to do each day rather than just making baby blankets! 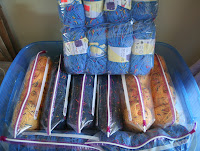 At this point, here's where we are...one white sweater finished, no hat yet, one pink sweater started, wings sweater off the needles, pink heart blanket...pattern is on flip cards and all skeins in the same dye lot gathered....and in a zip bag...and the count down begins!

Now, daughter also picked up yarn for two more scarves...I'm moving to New York Mom! I need more scarves! Yea, they're on the back burner....way back for now.

In other news...when is the last time you've had a fresh pineapple? This was oooooooo so good! and while shopping the other day for the non-grayish white yarn...we came across Berry Krispies! Now, can't wait to make some Rice Krispy treats out of these! I've made a truck load and a half of these while the kids were in school. The oldest daughter used to bring them to many football games in high school. To this day, it's a particular favorite. We'll have to see how these turn out. 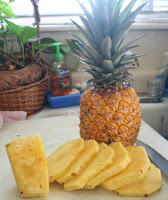