Much easier than I thought

Have you ever tried to figure out something that you spent a long time searching for information, only to find out it's one of those 'duh' moments? This week I figured out how to roast corn on the cob on the grill! I've spent many years thinking (or is that over thinking) that I couldn't find the recipe for the 'secret' handshake method to making this at home. I was resigned to enjoying the roasted flavor only at city festivals. Well boys and girls, festival no more! I soaked the corn in a pan of cold water for about an hour and plopped them on the grill and waaaaaaaa-laaaaaaaaaaaaaa the starchiest of the veggie world was a success. Way.too.easy. Why I thought I couldn't figure this out, is beyond me. Hand me the DUH sign. I earned that one. 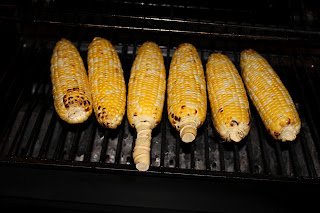 Now, a couple of years back I had actually given myself some New Years resolutions. One was color work. With the stranded work, I think I got the hang of it while knitting all those Norwegian hats back when I had been staying with Mom and Dad after Dad's surgery in 2010. Eh? Not too shabby. And while intarsia work was technically learned and used a bazillion years ago, like back in 1996 on a sweater for my youngest, I haven't used it all that much since. So....it's time. Notice the yummy stuff I'm going to use! (yes, it has been awhile since I bought it all. But to be fair, it had been sitting back in California when I came to Michigan for a 4 day trip. ha. Thanks Dad for 'stretching it out' a 'wee bit longer'! 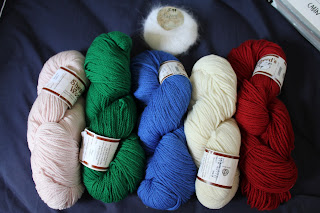 I have to say over and over again, how much I love this stuff! 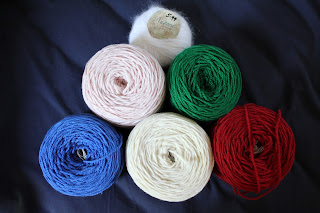 Which is a really good thing because I had to start it over three times last night. 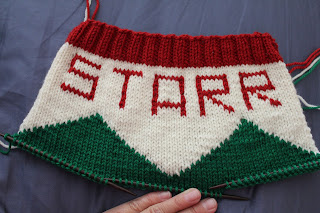 Turns out in my never ending quest to learn new things. I should stop over thinking what I'm working on at 2 am. And stranding a section that not only should be done with intarsia, but the directions also say to use intarsia...really should be done with intarsia. Good thing the feel of this stuff running through your fingers is sooooooooooooo blooming soft and the rosewood needles? What a wonderful combination. No, I don't need the double points for the flat work, right now I'm just enjoying the combination of the two together. 'like buttar'. 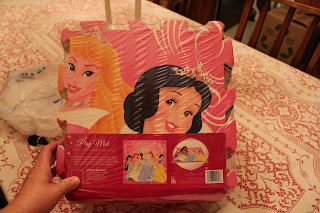 Here's another one of those items on the 'to do' list. I've read over and over in blogs, etc...how folks have bought the sponge floor mats to use with their knitting, etc... I picked up a set yesterday. Yes, I opted for the princesses pack rather than the cars, the sponges or the alphabet packages. We are a house full of girls here these days after all! 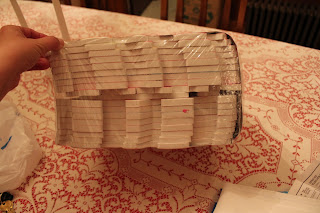 See how thick they are? 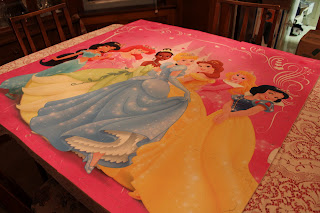 When they're all put together side one looks like this. Cute? Sure, but for function... 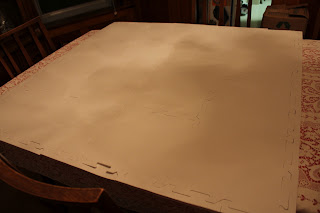 I'm going to use the back side which is white. I don't want to take any chances that the colors will run. The alphabet mats have colors on both sides. I do believe I'm going to pick up another set so they will cover the whole length of Mom's dinning room table. Compete coverage. I'm getting way too old..errrrrrr......pissy to want to cut fabric and dry lace work and sweaters on the floor. 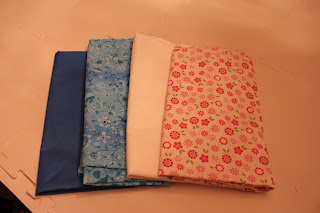 In the meantime, I've started looking at fabric again. the two solids are rip stop nylon that I'm going to use to back the prints. 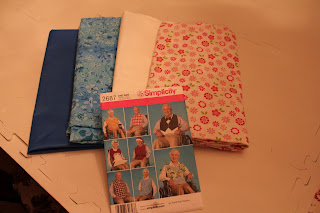 I want to make some 'adult bibs' that we're going to call 'short aprons' for Mom to wear while she's eating. For awhile now she's been using some old towels. I'm rather tired of the grungy look they have, plus they don't seem to want to stay up easily. I found some softer velcro to use as well that I'm hoping won't be so scratchy behind her neck. 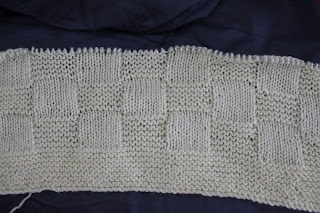 In the meantime, it's gorgeous and sunny outside. So I'm going to take the start of another NMCRS Basketweave Baby Blanket with me to the park and do a little KIP today. This decision doesn't need a single bit of over thinking. No DUH moment here! I'll save the story of the boomerang box for another day and why I have to knit up another one and a few more to refill the box. *sigh*...always something. Happy Knitting!
Posted by Cathy at 10:46 AM 2 comments: