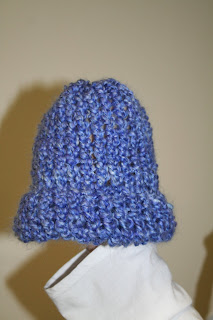 This is a first hat ever knit by one of my favorite people. 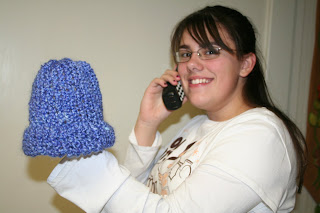 This is the favorite person on the phone telling her Dad that she just finished the hat for a former teacher's new baby boy. 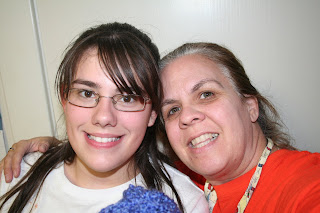 This is a proud Aunt of the favorite person who helped her figure out strange directions from the kit she had to make the first hat. 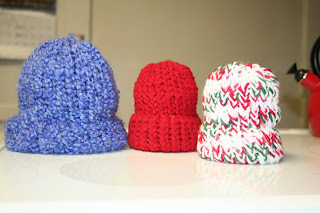 The first hat is on the left. The red in the middle is the one that I spent 3 1/2 hours trying to figure out how to make the blasted thing from instructions that ended up being printed upside down and backwards. The one on the right is the one that I made while favorite person was making hers side by side, so she could understand the 'less than perfect' directions she'd been fighting with for the past year or so. 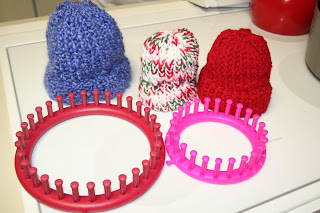 These are the looms we used to make the collection of hats.
My hat's off! to those of you who loom knit. I think I'll leave the loom knitting to my favorite person while I go back to my sticks and string. I can go faster with them.

However, favorite person now has the 'knitting' bug and wants to learn more and more and make more and more now that she's figured out that she can DO it! (heheheheheeh....) I'm thinking it won't be long now before the sticks and string that she's had for the past several years, might actually get used soon! After all, she's already had a teaching video made JUST for her! Now, she might understand it better! (yes, I do have my motives!) 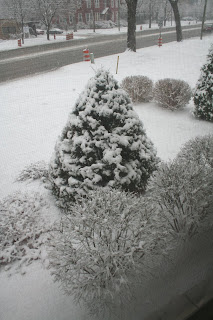 This is the snow we had after 3 hours of snowfall this afternoon. It's been snowing more since, and isn't going to stop until 7am. Help us hope and pray that snow will be kind to us-this has been very wet and could be slippery when we take another certain favorite person to the hospital in the wee hours of the morning to have a CT scan done to see if the Non-Hodgkin's Lymphoma has been finally chemo blasted out of her system! I don't want her to fall trying to get into the car! Yes, I spent some time shoveling the nearly frozen ruts away from the back door to the garage area. I'm not taking ANY chances on any one falling. Now, I'm wheezing and 'ticked' off that the 'management' who KNOWS the average age here is 75+years, actually closer to 79+ hasn't seen fit to do any shoveling that amounts to tiddly winks. I'm trying really hard NOT to loose my cool in front of the 3 favorite people who are trying to sleep right now while I'm trying to clear my lungs. I want only positive energy surrounding tomorrow's very important events. Today she had her blood test. Results due mid week next week. Prayers, hugs, hopes and dreams are all welcomed!
Posted by Cathy at 1:23 PM 2 comments: