I restarted the U of M colored Feather and Fan Rainbow blanket last Friday. I changed the number of yellow and navy pattern repeats and I think I like this set (at least for today) much better. With all the excitement of Mom's Birthday, I neglected to post the picture of the blanket. So, I wanted to get this done right off the bat. 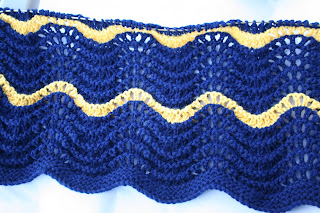 While we were in Michigan we had celebrated Mom's birthday early. My daughter and my dad were the ones who decided to go to Bob Evan's for breakfast. First of all, it's Mom and Dad's current breakfast favorite 'hangout'. Second of all, Dad is able to finally eat some solid food, and third, since it's a regular thing, Mom wouldn't guess that we were going to sing Happy Birthday to her. And it worked! However, when I asked their regular waitress, Kim, if they had a cupcake or something for birthdays, she said that they only had cinnamon rolls and no candles. Now, I ask you ...how does a restaurant have no candles when lots of folks go there for family birthdays? Had I known that, I would have brought my own. I would really like a 're-do' on that one. However, like I told Mom...You only turn 80 once! Since we were back in California on her actual birthday we settled with a phone call. Sounds like it was a great day back there for her...a visit from a life long family friend of ours, flowers from my cousins, pasties from my daughter, and hugs from my niece and brother. Now, Dad, you're up next in July! 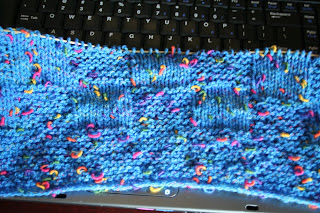 Yesterday started the challenge on the other niece's baby blanket. Had I not committed to this, I probably would have ripped this out by now. I'm not so sure I like the wiggles yarn for this pattern very much. I'm thinking this would be perfect in a 'Grandma's Favorite' type knit with all the 'wiggles' in the yarn. But, the more I continued on yesterday, the more the pattern began to show. I guess I'm just used to a much smoother yarn for this blanket. But, now that I've got the Internet connection smoothed out this morning...I'm willing to keep going and see if I like it better with a completed blanket. 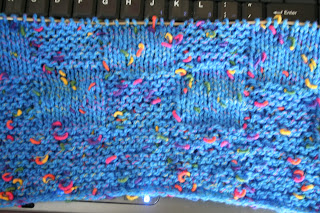 Have any of you used this yarn before? I have a lot of this in my stash from back in July, I think it was. I'd hate to think I picked up a really good sale if I don't like this stuff. But, when I get off this island of requested blankets, I would like to try using it with the Grandma's favorite pattern. Maybe double stranded on size (US)11 (8.00mm) needles. I've made a few like that in the past - double stranded with sport weight/dk weight on size 11's and find that it comes out rather cuddly.
OK, enough with the procrastination! I have a couple of blankets to finish! KNIT WOMAN!
Posted by Cathy at 10:19 AM 2 comments: