This has been a couple of weeks that have passed by very quickly! I'm glad that I have taken pictures so at some point I will be able too sit back and enjoy what we all had together! Hopefully, on dial up these days (ulg-don't ask) I'll get this story up in parts as uploading will allow me to add pictures.

First, was the trip to Indiana to meet up with my son and our drive back to California. Let me say this...my son has the coolest set of music on his I-Pod! Hours and hours of great stuff..country, to 70's, to Motown, to dance, to hip hop! and a few of those songs you tell your kids; "you have to wear head phones on that..cuz it's not something I want to hear". Followed with; "don't you EVER let your Grandmother hear that!" The only time on our whole drive home that a song was repeated, it was by request. That kid has some kinda collection! (sure hope he's got it all backed up on Cd's...ask me how I know this is important! GRRRRRRRRRR.....)
Continuing with the story... I got into the airport on an earlier flight. Just a bit ahead of his arrival to pick me up. That first conversation went like this:
Me: Hey kiddo! I got the earlier flight so we can hit the road earlier.
Son: Well, I'm not exactly finished packing...
M: What do you mean-'not exactly'? I called you this afternoon and told you I was going to try and get in earlier.
S: Well, I know what I'm bringing home, but it's not in the car.
M: Haven't you been off of school for a few days now? And I couldn't come in before Thursday, so you had EXTRA time to pack?
S: Well, you know. I had people to see.
OK, so he gets to the Indy airport and off we head into our little adventure. Stopping off at his house (6 grad students in one house...6 MALE grad students in one house) to pick up his stuff and hit the road...it's nearly 10 pm now. There are piles of clothes-some even folded (when did he learn to do this? ) on his bed, and there is this stack of books

from one semester to cart home. (So glad I didn't have to read this amount for college) and this is the pile of papers he needs for his research paper this summer!

(I'm so glad this kid loves to read!)
As we go up and down this staircase

to bring down his stuff next to the door...he starts texting on his phone. Not one, but with two different girls. (Mom pulls out preemie blanket to work on while he's deep into conversation. Thank goodness for knitting!) He then gets to his computer to print maps for the trip. (Mom feels much better with maps in hand. ) Keep in mind, with all the driving back and forth for three years of school, his plan is to add to his goal of seeing a baseball game in each stadium across the country. Last year, AFTER he pulled out from his apartment, he asked us to check which teams had home games while he was out on the road. I texted him driving directions over the phone to the stadium, for a haircut and finally home post game. This year I said I wanted maps prior to leaving. So the next conversation went like this...
S: Mom, do you want to go to a baseball game on the way home?
M: Heck ya! I love going to games with you! Where abouts?
S: We can go to Dallas, or Houston, or both.
M: Do you know how far away Houston is from Dallas?
S: Not too far, really. About the same distance.
M: Are you kidding me? It's at least 4 hours in the opposite direction of where we need to go after the game. Texas is a bit of a 'swing' out of the regular path home, but Houston is a much bigger swing. How long do you want to take to get home?
S: OK, so we'll just go to Dallas and not to both, OK?
M: Sounds like a plan.
S: Well, Since the game is at 7pm tomorrow, we really don't need to leave until 2am and we'll still have plenty of time to get there.
M: Wake me up when it's time to leave.
S: Mom, we need to get this stuff downstairs. You don't need to sleep.
At which time there is more texting with the girls and I decided to plug in my camera batteries to make sure they're both full before we head on off down the road. (baseball game will need to be documented..right?)
S: Mom, don't do this..it's a bad idea. You're going to forget it.
M: Kiddo, I'm sitting right here, the light is on and I can see it every time I walk into your room and there's no way I'm going to leave this behind. It's going to be fine.
S: I'm telling you Mom, don't do it!
M: Kiddo, We have to unplug everything before you leave, it's going to be fine.
(Cue the music. You know the kind....da da dada da dadadadadada............)

Once everything is downstairs and the first battery is fully charged and in the camera, I thought I'd plug in the 2nd battery and give it all the charging that time would permit while he was packing the car. I stood in front of his TV staring at the battery to make sure I wouldn't forget to take it with me. (getting late now, and I'm feeling the 1:30ish time)
S: Mom! Don't do it! I'm telling you...not a good idea.
M: Kiddo. I'm right here. Let me know when you've finished packing the car and don't forget my bag and computer case. I'll be right there. I don't know how many pictures we'll take at the baseball game and I don't want to run out of battery juice.
S: Mom....
M: I know...but it's going to be alright....I promise!

Car is packed...and off we go! Right to the grocery store for Red Bull and Pepsi for son, water and diet Coke for me. As we are pulling away from the store he says...
S: I wish I had had the chance to say Good bye to everyone. I had been invited to a party tonight and didn't get to go.
M: Well, we haven't left town yet, swing by if you want to say a quick goodbye! It's only 2:08am. What's a few more minutes?
(3 days later, he admits to me and his sister that he went inside the gathering to greet his friends and nearly forgot MOM was OUTSIDE IN THE CAR! He almost stayed for the remainder of the party! Ulg. Good son....good son.)
Finally...off we go...heading south in a packed car...music playing and on our way home! Here's where the 'girl' stories all begin...he's got a ton of 'girl stories.' So cute. Remember those days of past? Flirting, dating, hearts crushed...Listening to music as we head on out of town. (Dang, great music!) Mom has put a limit on the songs tho'...no songs that would remind him of old girlfriends. Period. Mostly he stuck to the rule. Well, unless I didn't catch him and turned it to a new song, that is.
Down the road, I decide to take a nap so I'd be awake and ready to drive when it was my turn. Well underway, somewhere near the MO/Ark border I wake up in a sweat! Shaking and panicking! "Slightly" panicked!
M: MY CAMERA BATTERY! I LEFT IT AT YOUR HOUSE! (saw that one coming, didn't you?)
S: Told you it wasn't a good idea! (said calmly with a bit of a smirk on his face)
M: I HAVE TO HAVE MY BATTERY AND MY CHARGER!
S: I'll be back in August and I can send it to you then.
M: ARE YOU KIDDING ME? I CAN'T GO THAT LONG WITHOUT RECHARGING MY BATTERY! CALL YOUR ROOMMATE, GET THEM TO MAIL IT TO ME.
S: Not going to happen Mom, they're gone for the summer.
M: GRRRRRRRRRRRRRRRRRRRRRRRRRRRRRR!
S: I told you not to plug it in.
M: I know, I know...but...but...
Driving along,

and the gas tank is low. Very low, and making Mom nervous. Kiddo thinks it's funny

to stress out Mom and this is how the gauge looked!

I rest my case. This music better be good to keep the vein in my head from popping...
Pulling into Dallas gave us several hours before to the game to find something to do. There was a Best Buy around the way from the stadium where we went to buy a new battery and recharger for my camera. Another situation where it 'all depends on the week...'
M: Here's my camera. We are traveling and I left my battery and charger behind. I need new ones, do you carry them? We're only here for the baseball game. Do you have any? Generic would be just fine.
Best Buy Dude (polite name for the kid I'm ready to strangle..figuratively speaking, of course)...Ah, we don't have any for your camera, but we can order one for you.
M: I just said we were traveling and only stopping in town tonight for the game.
BBD: I can order it, it would be here in a couple of days.
M: Do you listen? We're only here for a couple of hours.
BBD: Oh, I'm sorry. We don't carry rechargers that would fit your camera.
M: What's this? Would this work for my camera? (box of generic recharger hanging on display wall)
BBD: Oh, Ya, that would work. I didn't know we had that here.
M:
Next part soon....here's the baby blanket that seems to have no end...it's due in Michigan on Saturday for the baby shower. Count down begins....will she make it? Stay tuned.... 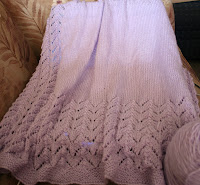