Do you know what these are knit for? 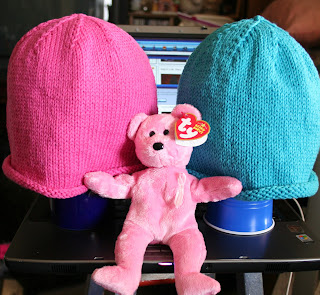 Hint, they're chemo caps. And they're knit with hugs and love and wishes for fast healing when you get a phone call that starts with, "I'm going to lose my hair." Who made that phone call? 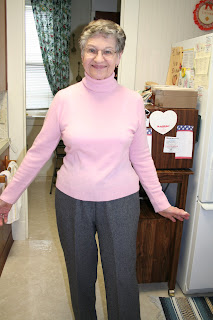 My Mom.
And her chemo treatments will begin early tomorrow morning (8:30am eastern time). All good wishes, prayers, and healthy thoughts for her would be gratefully appreciated! Mom has been diagnosed with stage 3 Non-Hodgkin's Lymphoma. When she collapsed back in March while I was home for Dad's surgery, they found a mass on her kidney. Well, that mass isn't on the kidney, but is pressing on it and is now in the company of other 'spots' in both of her lungs, esophagus, stomach and another spot on her back. This is her 3rd go - round with that pain-in-the-butt 'C' word.

For the past few weeks, I'm sure you've noticed a 'lack' of postings. Yes, I've still been knitting (I'll show you in a moment), but I've also been hibernating while the testing and results have been continuing. Now you will understand, I'm sure. There was another family illness which worried many, but is now better and my cousin's son, lost his father, all within a couple of days. For the first couple of weeks it just felt like sucker punch after sucker punch after sucker punch. Then I wanted to wait until we knew for certain all what we were dealing with before saying anything. Then, I had to begin to digest this whole process.

Today, I'm beginning to breathe once more. No more crying. No more negative energy. All positive thoughts and thankfulness that she's got health care, a great medical staff, and it was caught in time to let the doctors kick some "C" butt! That's my story, that's the plan, and I'm sticking to it! And at some point when she finally lets me, I'll go home and fill their freezer with more hugs and love that it can hold! (And I'm still not thinking about another daughter getting ready to move across the country.)

We're celebrating Dad getting back on his feet, beginning to drive again, rejoining their mall walking group, and taking Mom out for their Anniversary a couple of weeks ago! His recovery is going so very well!

So, on with the knitting....the picture issue (What's missing from this picture of a few weeks ago....) I found this still hanging on the wall as I walked in from sending the rest of the birthday knitting to the baby girl. 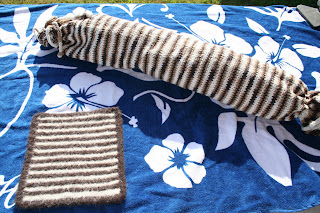 They should have been in the box along with the rest of her Chocolate Chip cookie/Chocolate and Vanilla colored kitchen knitting group! ULG! Don't you hate that? I've teased my kids for a gazillion years, that I'll never change. Now that the Easter Bunny isn't forgetting where the last 2 eggs were until July, or Santa forgets until June where the last stocking stuffer was hidden 3 months prior to Christmas, I'm still prolonging the celebrations by forgetting all the gifts in the Fed-Ex box. It wouldn't be me if EVERYTHING was on time! (har har) 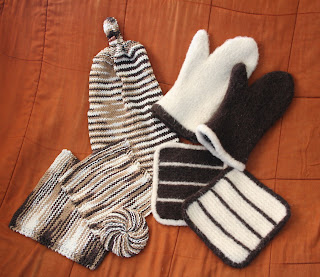 Then, there was a certain movie the older daughter and I went to...and celebrated with these. Need a hint? 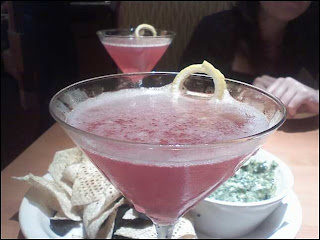 This martini cloth seemed to be perfect for her 'pink' collection of kitchen things that she's packing for her return to Grad School. 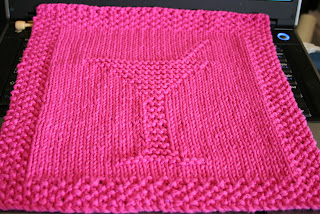 You can find the directions at:
http://www.bavgirl.com/Martini%20Glass%20Dishcloth.pdf to make one for your favorite Sex and the City fan. It was fun to sit in the theater while everyone was cheering Charlotte on! (I won't spoil the movie for you), and I can't remember since seeing Animal House with a theater of Frat boys...where there's been as much audience participation during a movie! They really knew the story line there, that's for certain.

Next up was middle daughter's birthday. She got a kitchen set in colors that she shares with her Grandma's favorite color. She's been doing a lot of 'domesticated' cooking lately, and talking with her Grandma about favorite recipes. No matter how much she claimed to be Non-domesticated in her younger years, she's getting pretty good these days. Football is not her only hobby anymore. 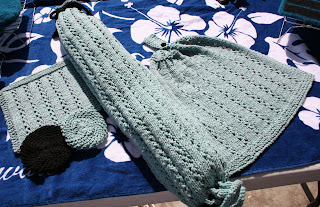 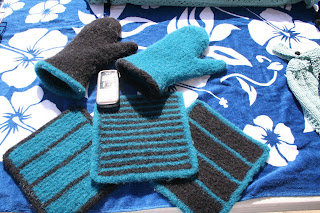 When I finally finished Dad's vest (OH YA!) and mailed it out the day before Father's Day, I added a kitchen set for my Mom as well. 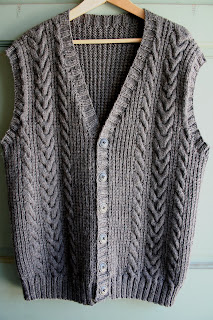 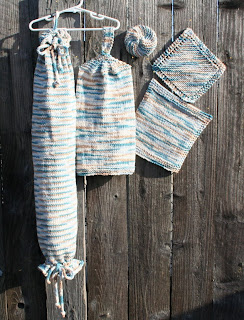 Dad's vest comes from June, 2007 issue of Knit 'n Style, called Man's Cabled Golf Vest by Brenda A. Lewis . I loved this pattern! I loved the cables, I loved the Paton's Classic Wool yarn that I used and told Dad that I hated mailing it off. As much as I wanted him to have it, I didn't want to give it up. It was like being able to hug him every time I worked on it. So, he's wearing lots of hugs when the weather gets cold again so he can actually wear the vest.

Mom's kitchen set, is the Simply Striped Sack Sock, Simply Striped Kitchen Hanging Hand Towel and Dishcloths, you can find in the pattern list over <<<-----there. I used Lily's Sugar'n Cream Culinary Colors in the By the Sea colorway. Check out how close these came to the end of the skein! That tail was all that was left after all those pieces were knit. 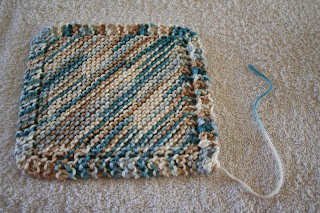 This colorway is SOOOOOOOO her! The teal is her favorite color, and the beige and tan are the colors of her china. I had originally picked out some mint to make her a set (her 2nd favorite color) but changed my mind the moment I saw this one at the store.

In between all the family needs, I've been fortunate to meet some great online knitting buddies from the AC4C group. I had to bring them a little 'cotton' for their kitchens. 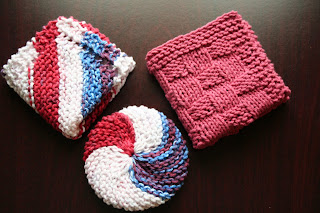 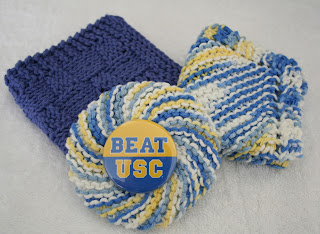 This is Arlene and Ellen! How wonderful it is to have the Internet to connect those of us with a love of all things knitted and hearts for giving. It's such a bonus to meet others in person that you've 'talked' to over your typing skills and picture trading. I'll treasure the opportunities deeply in my heart. 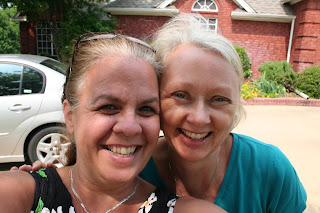 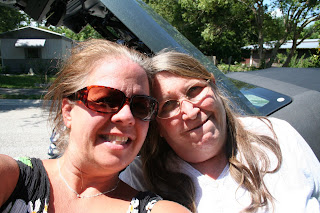 I've knit up more hats. This one is out of Caron Simply Soft mill ends from AC Moore using the Hat's On! pattern of Stockinette Watch Cap. 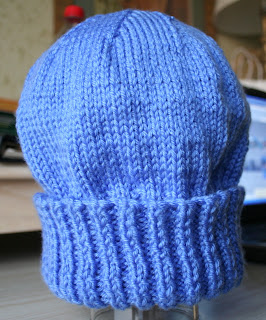 Then I turned my attention to making slipper socks. The AC4C yahoo group has picked the Ships Project for the month of June to knit, crochet and sew for. While I've technically knit socks in the past (3 socks to be exact), none of them were publicly wearable. I would need children's floaties around the ankles to keep them up for my goofy feet. But, in honor of my Dad for Father's Day, I made the first set in a Cranberry/Maroon color. The color is about dead-on in this first picture. Washed out in the 2nd on. 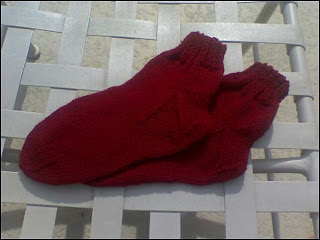 These just look HUGE to me! Yes, that's my foot next to them, and I'm reassured that there are many in the military who are working/sleeping in very cold areas of the ships, or the wounded who will use these while in transport back home with feet that will fill these up. I just personally think they look like the circus should come for these sizes to fill those clown shoes! 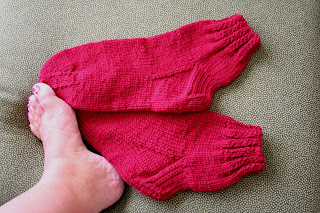 Then, as it was pointed out on the list, the color I picked was very close to a 'buckeye' school color. Well, you KNOW this Michigan girl couldn't let that rest. Yes, my first pair to be actually worn by another human is in the CRANBERRY color in honor of my dad.. I had to quickly knit up another pair. With a hat! What color would you guess? 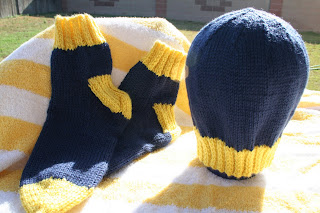 Well, U of Michigan inspired of course! Simply Soft yarn, again. DK Country Blue and Lemonade were the colors. Now, if only I had a 10" length foot, I could wear these when I got cold at night. But since my feet are quite a bit smaller...they'll be mailed to Ellen first of July.

Then I got to thinking...there are more teams in Michigan that I can put colors together for... 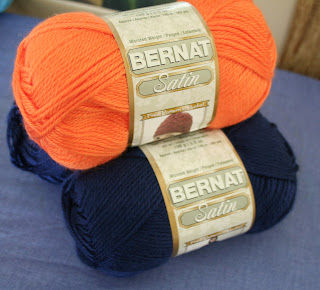 and the Red Wings... 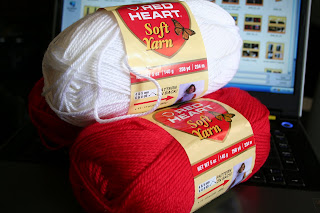 Which made me think of my kids and the schools and teams that they've gone to/going to/love...like Boston U while I was looking at the red and white... (and the Red Sox for the daughter and son with the new Boston adresses...Guess I'll have to find some Celtic green now, too...) 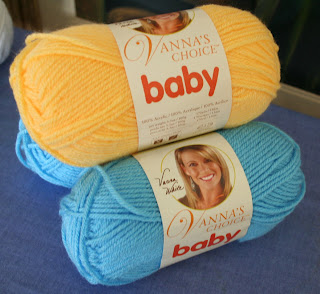 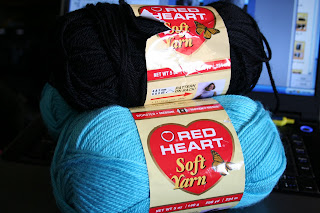 You know....Beth Koskie over at AC4C yahoo group might have unleashed a slipper sock monster with her Slipper sock pattern! The color combinations are endless..

Yesterday, I knit up a chunky hat out of some Lion Brand Wool-Ease chunky that I came across in the stash. Don't know exactly where it's going to yet..but I have a lot of chunky yarn that is just sitting there. And yesterday was the kind of day I needed to do something to keep from thinking...so, I knit a hat. 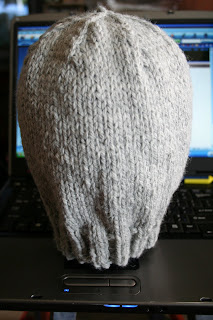 There, I think I've gotten all caught up on here. Mom just called while I was typing this all out to say she went and picked out a wig today. She's prepared. She also went through all the drawers of knitting that I've made for her over time and said..she's got a ton of hats to wear! Some, I didn't even remember making until she reminded me. HA! That was pre-Ravelry/blogging days when I wasn't so good at keeping track of all I knit. She's ready for tomorrow. She's ready to kick some 'cancer butt' big time.

Me? I have a son with a birthday coming up so I need to finish charting some Dodger Blue kitchen things and I'm diverting that turquoise and black yarn to make Mom a pair of slipper socks. Just in case she wants to keep her tootsies warm during her 7-8 hour chemo treatments for the next 21 weeks. And, it keeps my head from thinking too much. Her feet aren't as big as those other socks, so I have to figure out how to shrink them a bit. It's still a learning curve over here!

For all of you who knit (or other crafts) and give to donate to cancer causes...bless your hearts! My Mom's wig was given to her today...at no cost! And, she's very thankful for the outpouring she's taking her turn to receive now. Even if we both agree, it's a lot more fun to be on the giving end, that the receiving end. But for now, she's taking her turn.