So, have you gotten finished finding all the little things lost amongst the wrapping paper yet? 'Tis the season! I remember those days...tons of little things that were opened by little fingers as paper threw through the air...and when you THOUGHT it was all picked up, and you went to put parts together, off to the bags of trashed wrapping paper you went to find that package of little parts that jumped in when you weren't looking.

I miss those days. Not how tired I was, but I miss those excited grins and giggles of the kids when they were little. However, this year, with adult kids that don't live at home anymore, we're learning to develop new memories. And it's time to share a few. 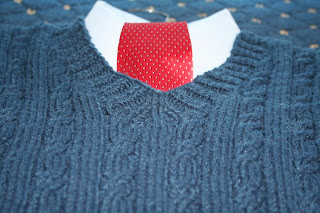 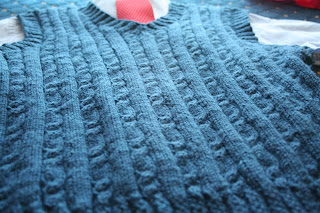 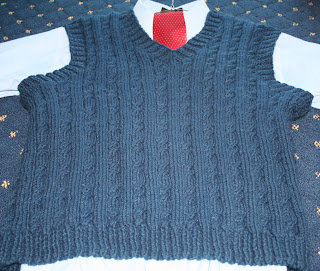 OK, this was the 'stealth' knitting, but it wasn't holiday related. Rather, a birthday of sorts. The big kind of birthday. As in the big 5-0. And it went over well. Totally undetected, but asked for for quite some time.
details:
Lisa Knits 'Office Vest', www.lisaknits.com, size large, Ella Rae Amity wool/acrylic blend, 7 skeins, (US) 6 (4.0mm), (US) 7 (4.5mm) needles. Loved the yarn, and the pattern, but I did change the ribbing to a 2x2 twisted rib (again). If I were to make this in the future, I'd drop the ribbing on the bottom and the armholes to a (US) 5 (3.75 mm) and I'd drop the armhole sizes down to 140 stitches. I re-knit the armholes 3 times and I'm still not too excited about how 'floppy' they were for me. Don't know, might be my knitting...but I think it would turn out better with a smaller needle and a fewer amount of stitches. Then again, when I slipped a shirt under the vest to see how it would fit, the armholes seemed to settle right down.

I've also picked up a few others of Lisa's patterns for little kiddos, and I'm looking forward to knitting them up. One of the little sweaters, TOUCHDOWN! is really burning a hole in my knitting list-it comes with a knitted up football pattern! Can't wait to see how it turns out.

Alright, onto other knitting...the scarf and hat for my niece (you know those purple and yellow items in colors for an Aunt to really demonstrate true love since hers is the 'rival' high school from way back in my 'youth'...you know, when the dinosaurs roamed...) ya..that set... According to my Mom..the first words out of her mouth were-"Oh! This must have been hard for Aunt Cathy to knit with these colors!" But, she loved 'em. 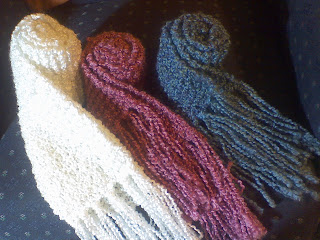 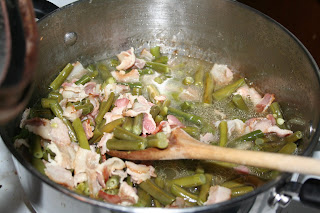 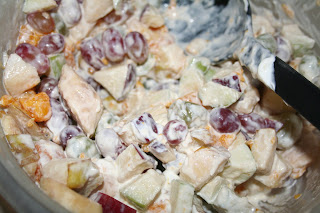 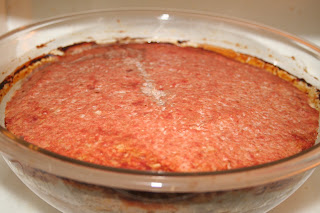 Holiday dinner had green beans and bacon to feed a lonely daughter's soul after not exactly enjoying her take out Thanksgiving Dinner that didn't include the bacon and fresh green beans. Then, with the help of a certain baker's helper...I've learned a few things that had apparently escaped my notice over the past gazillion years we've been making and enjoying fruit salad. One-we use two kinds of grapes, not because it's the recipe, but rather, because the red and green are Christmas colors! Which then also means 2- the same goes for the red and green apples in the fruit salad as well. He still isn't a fan of the Swedish Sausage we have for our Christmas dinner, but then again, that just means more left for those of us who do. Then it leads to 3- if you can't be with big sister #3 and big brother #1- speaker phone is a fun way to tease each other and find out what Santa brought. And learn that your big sister is psychic about your thinking about eating candy! 4- if you don't like Swedish sausage, then Coco Wheats is a great alternative when you're not at home with your own parents. Which means 5- spoiling 6 year olds that aren't yours, can be fun. 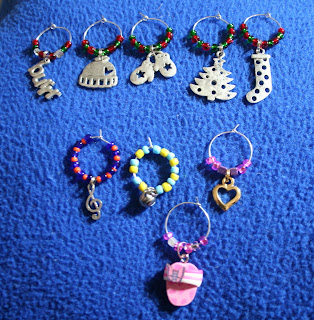 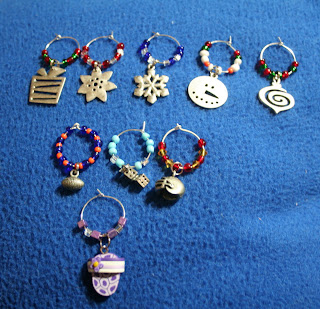 When you have adult children, you can make them wine charms. And once your son learns that they're not earrings, he figures out that the baseball glove and baseball one in UCLA colors was made just for him. (should have taken pictures of the other two sets before I sent them off via Fed-ex. nuts!) 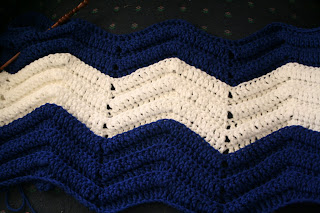 This is another 'stealth' project,but I'm certain that the baker's helper isn't a regular reader here, so I can share it now. He's been telling me for quite sometime that blue and white are his favorite colors. This will be his afghan if and when it's ever finished. I'm making it in Hobby Lobby's Yarn Bee....I Love this Yarn! in Royal and White using Lion Brand website's pattern for Crayon Ripple Throw @ http://www.lionbrand.com/patterns/cja-cray.html .While working on it the baker's helper asked what I was doing. I said I was crocheting to practice since I'm not as good at it as I am at knitting. He said if I was just practicing, could it have it when I'm finished? I said..well, let me practice some more and see what I can do. (This could be fun.) 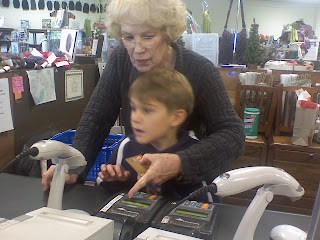 Later on, he asked if I could knit him a square in blue and white squares so he could play with them. After thinking some more and we sat down and designed a few ideas, we have a plan. And the day after Christmas we took off for the yarn store so he could pick out his color choices. Here he is with his new friend Nancy where she was impressed with his behavior in the store and let him 'ring me up' with our new purchases. Boy did he get a kick out of that! Now he wants to run the cash register at every store! (I had to sit down and explain that it was one time only deal. Hated breaking his heart.) 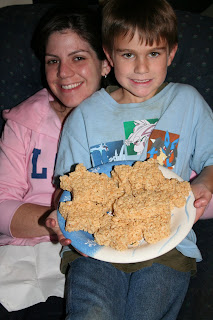 Later that day come learning thing #7-since he's on a kick to make everything into a surprise for Syracuse sister, making her favorite Rice Krispy treats meant trying to make them into cookie cutter shapes. Another thing I've done mindlessly time and time again without thinking of another variety. I covered the cookie sheet in plastic wrap, sprayed the wrap and the cookie cutters with pam and we pressed in the warm rice krispy mix (recipe over <----- there) and let them sit for a few moments to firm up before taking the cookie cutters off. Delicious both for the recipe and the ideas and the love from the baker's helper towards his sister. (Now to get the rest of the big brother and sisters to come home to let him spoil them, too!) 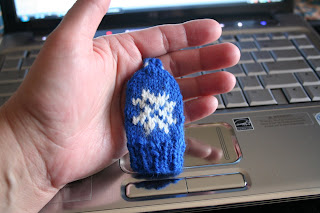 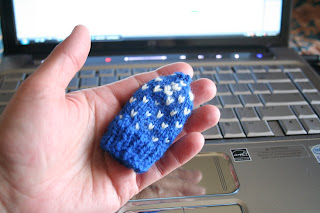 Yesterday morning I pulled out my copy of "Folk Mittens" while looking for some 'inspiration' of knitted charts and found the pattern for Miniature Mittens in the back. I thought I'd knit up a pair after all the mini knitting I've been viewing lately. Since I've made up a couple of larger projects, or last minute hurry up knits, these are perfect. Unless you're having a horrible allergy attack and only had an hour's worth of sleep the night before. I had to rip this one mitten out 3 times and I THINK I have it right. I'll make the 2nd one up later once I feel better. I'm now battling a mother of a cold and my ability to focus my eyes is rather nil. I'm using Plymouth Encore DK in #133 Royal and #146 Soft White. However, I think future mitts will be out of Baby Ull. I think 100% wool would lay better than a blend. (does that make me a snob on the rise?)

In other news, I have located the pattern for Mom's vest that I was looking for. Note to self, when all else fails, check the bookcase for the "Knitter's" Magazine rack when you've 'misplaced' the pattern to find all you did was put it away in it's proper place. ULG. After all I've searched. It's in Knitter's 76, Fall, 2004 called Patchwork Vest. So, when I'm ready to pick it up, I'm all set, especially since I have it written down here and in Ravelry now to be able to find it the next time I lose track of it.

The best quote of the last bit of a while came the other night. Baker's helper looked at me and said, "You really love yarn!"
Yep, I have to agree.