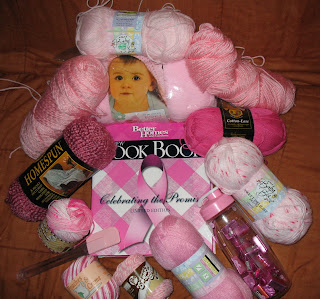 The week began with a pile of pink. Pink is good. Pink is good in October to remind us of Breast Cancer awareness. As I looked at the Pink in my stash of yarn, I got to thinking that there were several things I could do without going to the stores. I ended up with a couple of finished objects. Not as many as I wanted to, but it was good. 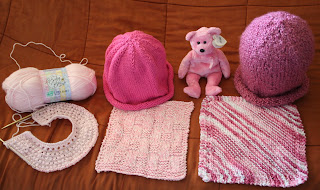 I started with the Homespun Rolled-Edge Chemo cap that I posted the other day. When I was sitting very concerned about my son, I needed to switch to something I could do without thought. That's when the Grandma's Favorite cloth made with Peaches & Cream in the Strawberry Cream came into play. I took it up to 50 stitches and used a twisted M1 rather than a YO for the increases. 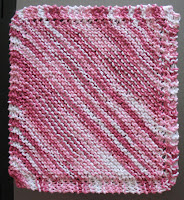 Then I decided to make a Puffy Basketweave Dishcloth out of some Pink Twists yarn. I have had this for a while now, but had yet to try it out. I found out this week the way the gauge was a bit different than the other cotton yarns I've been using. It seems to be more narrow than the others. You can tell I didn't make the full pattern for this dishcloth when I noticed that it was 'taller' than wider. It's still nice and I like it. And it's still going to wash spaghetti off the dishes. 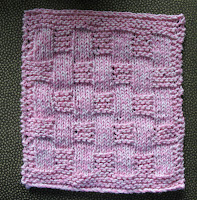 I thought pink dishcloths would be good to send to Mom and my Auntie "N" in celebration of them both hitting their 5 year marks post Breast Cancer. If you don't know someone who has had, survived, or is going through the big "C", why not have a few in your kitchen as a reminder to have your exam? 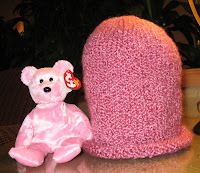 Then I was able to finish the Homespun Rolled-Edge Chemo Cap to start my collection of Chemo caps that I'll end up sending to the U of Michigan Oncology Unit at some point. I'll be making more sizes here shortly and posting them between my life on the Island of Baby Blankets. I promise! They're good projects for between larger ones for that instant gratification need. I have quite a bit of Homespun yarn left over from years ago when I was living on the Island of Scarves. At that point there were colors requested that I couldn't always find, so I started picking them up when I was able to. Right about then, the requests slacked off. So, guess what that yarn is going to become now? Yup. Chemo caps.

The last chemo cap that I was able to finish comes from the Headhuggers web site. http://www.headhuggers.org/patterns/kpatt01.htm is where I found this one. I decided to use some of the Cotton-Ease that I've had since it was discontinued from the old colors. I really like this for chemo caps, too. It's soft and light weight and not so hot to wear. And I love this Bubble Gum 'flavor'..er....color. I like the way it knits up. 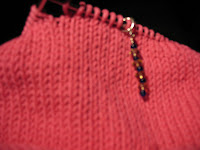 The first picture was taken with the camera I was borrowing while mine went to the camera hospital. It was at night which explains the darkened color, but it didn't do so well at stitch definition. The picture on the right is with the newly 'healed' camera back in my little hands. YEA! This is the cap without being blocked. I really like the top of this pattern, too. I love the way it seems to swirl.

All finished! Next to my little beanie baby buddy standing, errrrr sitting guard.

Tonight I've been working on another Baby Jiffy Knit sweater in Hobby Lobby's Sweet Delight's Baby in Pink-a-Boo. I've finished the body of the sweater but I'll make the I-chord and hat tomorrow. It's getting a bit late here, and I'd rather not have to rip it out due to silly mistakes.
With all the PINK in your life, don't limit your knitting to just Pink Chemo caps. Make them in all colors. Use pink in a baby sweater like I did for a baby girl on the way...and knit in good wishes that this big old nasty "C" might not be around as she grows up. I look back to my childhood when my Grandmother would whisper the letter "C" rather than say Breast Cancer out loud. The very sound of that word was a death sentence. And today, both of my parents have beat it. So has my Aunt beaten it, too and there are new advances in medicine all the time! I celebrate those miracles and wonder how much more they'll learn by the time my children are my parents' ages. Science is a wonderful thing-No?
As a final thought tonight about my family's experiences this past week I'd like to say a hearty thank you for all the wonderful emails, etc...for my son. Please understand how much they've meant to me. He got back down to Indiana in once piece but a bit sore. He is now having to deal with the 'processing' of information over what he went through. That might take some time. I talked to him tonight and was very happy to hear him on the phone. I still want to go hug him until his eyes 'pop'. Like the day when he was a wee little guy, and I thought we'd lost him. I had to call the police and was in the process of pulling out his finger prints for the police officer when the phone rang and he was calling from his dad's work. I was never so happy to hear him on the phone! He had no clue how worried I was! His sister and I were due at a Girl Scouting event that day, but I refused to budge from the house until I could hug him really tight. Maybe it's a 'Mom thing.' But I'd really love the chance right now to go hug him like that. Really, really tight, until his eyes pop!
Posted by Cathy at 11:09 PM 1 comment: