OK we're almost ready to post pattens. Now that my plug for the computer is reunited back with the computer, I am back online. Sheeshhhhhhh....brilliant move.
These, however, have now become my constant companion. I had another brilliant idea of moving boxes around. I should have known better since falling 5 years ago. It ALWAYS brings pain. But, the thought of putting away the Christmas boxes seemed to be the right choice at the time. Right now, they're 'nearly' there. They're out of the house but not up where they belong, yet. Guess that'll have to wait until I get some additional help. Lifting boxes, or pushing them tend to give my bad hip so much pain, it hurts to breathe. And it takes days to get it to quit. We're now at 8, if anyone is keeping score. 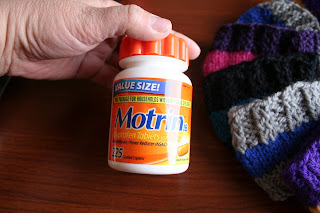 In the meantime, I've not been slouching off. The 'knit me something square' has now become a pillow. At the request of the 6 year old. 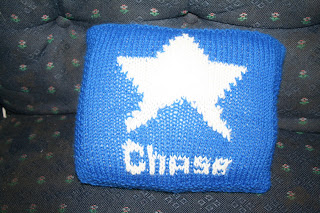 The Mini mittens are finished. Well, sorta. I hooked them together from the top using and i-chord with the top stitches. But I'm not sure that's how I want them hanging from the Christmas tree next year. Mittens generally are chained together from the cuffs for little guys to wear through the sleeves of their jackets. What do you think? Should I re-do them and hook them via the cuffs? The Miniature Mitten pattern is in the back of the book, "Folk Mittens". I used Encore DK yarn in both the royal and soft white colors, (US) 1( 2.25mm) double point needles. 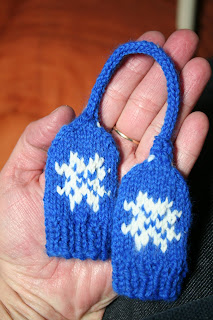 As is this pair of mittens. They're the Classic Mitten pattern from the Folk Mittens book. I used Encore worsted in the Royal Blue color with (US) 4 (3.5mm) double point needles. 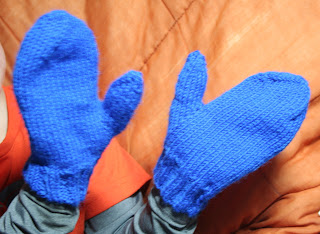 Did you happen to see the moon the other night? I didn't get the pictures at night, but rather yesterday morning. The pictures make it look much father away than it felt with my own eyes. I guess it was the closest the moon is going to be to the Earth. I found it to be just fascinating. 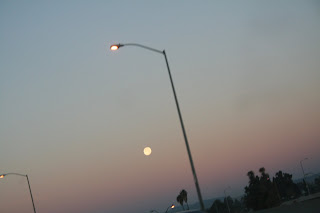 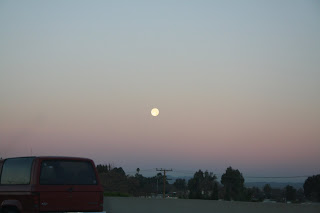 I've started yet another slipper sock for Ship's Support. This one needs the toe grafted and then of course, a mate.

I've started another Christmas Eve Scarf in Hemplewhite. Do you KNOW how much Homespun I still have? I had bought a 'bit extra' years ago to bring with me to teach my knitting class so the new knitters could pick which color to knit with and get started right away. Having the class end unexpectedly (thanks to some major interfering from an outside source with the agreed upon schedule) left me with lots left over. Oh, well...click click click..the needles are busy. 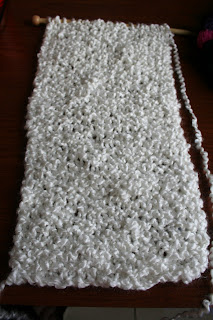 And, as I'm putting on the finishing touches with the pattern writing, here's what I'm using for them. It's said that the best way to improve something is practice. Practice, practice, practice. So, for me, I make more than one of some technique. 2 years ago, I decided that I wanted to learn to make socks and knit better with colors. In 2007 I learned the techniques, 2008 I made something for me in the colors area (Norwegian Star hat) and for 2009, I want to do better all
way around. You'll see in a moment that I've made more than one of each of the patterns I'll post tomorrow (barring any more 'brilliant' moves). 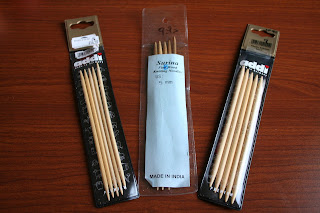 Yes, I'm using double points. Not just one, not two, but three pairs. (US)6 (4.0mm), (US) 8 (5.0mm), and (US) 9 (5.5mm). If you feel better knitting the items flat, you can. If you're happy with the magic loop, knock your socks off. Or use 2 circulars like I do for the crowns on hats. It's up to you how you want to knit these. They are in the round. I would prefer to not have extra seams to sew up. To me, if there's a way to cut down on time and to make something faster, it means in the round. It's up to you. But, at times, I like double points. Even with the new Addi clicks that came for Christmas! For this project, I like the double points. So, while you're digging out the type and size needles you'll need, I leave you with these pictures. Any ideas how to knit up leftovers from your wool ends? 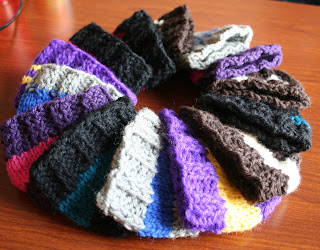 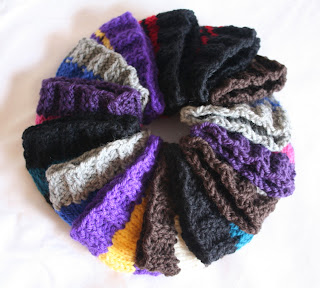