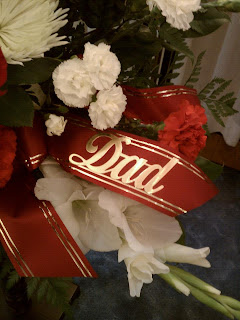 I now have a working computer once again. However, after flying into MBS to spend 4 days with my parents to then move my daughter back to California in hopes of her finding a degree supporting job, plans changed. A lot.
First of all, I have spent a lot of time here at my parent's house over the past year. Feels like I've slept here more often than I have at my own house. While I was in transit to Michigan I got a phone call the night of August 25th very late that Dad had fallen out of bed and thought he'd broken his hip. I arrived hours later to hear that his hip was fine, but he'd had a heart attack. Three days later Mom and I were packed and following the ambulance down to Detroit so we could stay near Dad while he was in Henry Ford Hospital. One complication after the other, one body part wearing out after the other,  family coming in and out of the hospital to stay with us to be with Dad...until he passed away on September 24, 2011. His funeral was on September 30, 2011. For now, I'm here with Mom in Michigan. My daughter in the meantime won't be going back to California, either, for now. While Dad was at HFH, she interviewed and was hired down in Detroit at another big hospital for a job that will use her degree! So she's commuting back and forth to help take care of Grandma again. Neither one of us want her to be alone, without family. We wouldn't have it any other way.
So, for now, the new computer is finally up and running...rarely with a direct internet connection here, and it's taken me until now to be able to write about this. Please understand if I'm kinda, sorta, a little bit back, but not all the way. It's been a long year thus far. In fact there was a lot to celebrate, more on that later, but this family has had better days. Just hours after my Dad's funeral, my cousin's three day old baby passed away, too. So many tears and hugs. I'll be around. I have been able to see many comments over the year via my smart phone, I just couldn't post from it. Yea for a new computer. I've missed so many things. But for now....I'll just say, until next time. K?
Posted by Cathy at 5:10 PM 16 comments: