Two of the last things I was able to finish before leaving home, was to knit up two more cloths from the Garden Clothes to knit book. This time they were the cardinal and the Michigan Cherries. I really like that book. Such cute designs! With Father's Day the day after I had to return to California, I was trying to finish these in secret. Do you know how hard it is to knit in private with family around? The cardinal was for my Dad, and the Michigan Cherries for my Uncle. Both of them are special to me. My Dad is going through Chemo and Radiation right now for bladder cancer. Today he should hear from the doctors if they're going to follow up with surgery. Hold a good thought/prayer please. His birthday will be this July, and he'll be 79. I'd like a lot of birthdays with him yet! Excuse this photo of my parents. It was only after I got home, I realized this was the only one I'd taken of them! It was on my cell phone, so it's not by far the best one I've ever taken and it was quite late at night. I wanted the kids to see that Grandpa was doing pretty good despite his 'glow in the dark' status. In fact, now that both of my parents have gone through radiation, I've taken to calling them the Glow in the Dark Twins. Humor...ya gotta have it, huh? 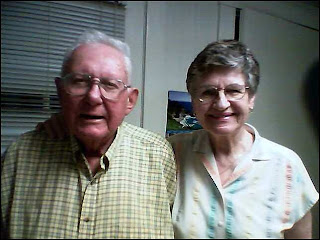 The second cloth, the Michigan Cherries is for my Uncle. He's become quite the caretaker these days, and I wanted him to know how appreciated he is by his family. The day I left Michigan, these two gentlemen were heading off to the ball park to watch the 'Old Timers' baseball game. Last year they saw several games, but this was the first one they were able to go see this year. They love it! Sitting in the ball park, with the very old rules. No gloves, and very different pitching rules from what my kids used in Little League. They were really looking forward to it in the days preceding the game. Once I landed in California, before I made it to baggage claim, Dad was calling to see how my flights had gone. Yep, the game, too had proven to be all they were hoping for. Beautiful sunshine, great game, and two very good friends enjoying the afternoon, sans the wives. Sometimes a guy just has to hang out with the guys I guess. Thinking about it now, I sure wish my son would have been able to have been there with Grandpa. For a kid who loves that game so greatly, they would have really enjoyed the event with each other, of that I'm certain.


On the way home, I got in some airplane knitting. Yep, another Rainbow Feather & Fan blanket.

Right before I broke off the end of my toenail. OUCH! Who knew that you could break a nail without knowing how or exactly when..and then have it hurt so much? Trust me, learn from my mistakes. Don't try this at home, children!

Yesterday afternoon I managed to get the blanket finished. Well traveled little blanket..May you keep a little one warm, snuggly, and and toasty...once the heat wave is through! 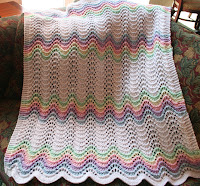 Now, for some good news to look forward to. Back on April 9th, I posted about the Baby Jiffy Knit sweater. I've been in contact with NMCRS about posting the pattern. Watch the blog soon! Wink Wink...something is in the works...(insert a big old grin here).
Posted by Cathy at 12:34 PM

I enjoy your blog. Suzanne

Thanks Suzanne!
I guess I can attribute this all to you! I started buying cotton yarn from your E-bay account, which lead me to the Babysweaters and Knitting Scarves yahoo groups..which then led me to blogs...which lead me to....
see what you started? Thanks! I'm having a lot of fun with this!

I also just bought the garden
cloth book, and my dad is 79 too!

I really enjoy your blog and appreciate you sharing your patterns.

Would you be so kind as to tell where the Heart Baby Blanket pattern may be found?
Thanks--Dee

The Heart blanket is from Leisure Arts #320 book, Knit Layettes for Little Darlings, pages 18-19. I'll share my 'changes' as I go along with the afghans.
Thanks for asking!

I have that Leisure Arts Booklet and never even checked out the blanket on the back cover.

I will be watching for your changes as I am a real new knitter with no friends that knit nor do I have a friendly LYS nearby.

It will be nice to have your blog to help me get through the pattern.
Dee